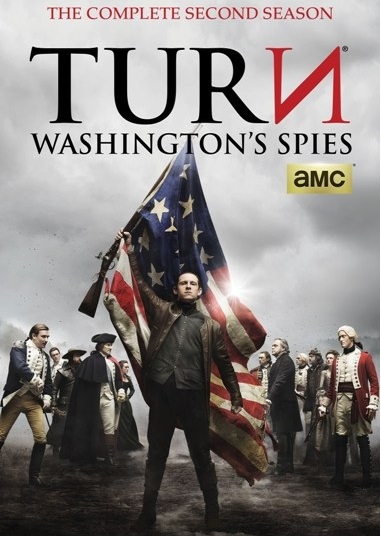 AMC’s hit period drama Turn: Washington’s Spies will premiere its third season this spring. In anticipation of its arrival, Anchor Bay Entertainment has announced that it will release the series’ second season just ahead of Season Three’s premiere.

Turn: Washington’s Spies – The Complete Second Season will be released in stores and online on Tuesday, March 22nd. It will be released exclusively on DVD and will contain all ten episodes from Season Two’s run on AMC. As Season two progresses Abe (Jamie Bell—Jumper, King Kong, The Adventures of Tintin) becomes even more involved in the actions of the Culper Ring. And General Washington (Ian Kahn—Dawson’s Creek, As The World Turns, The Box) faces his own battles both within himself and among the men that he leads. The battle for independence heightens even more both on and off the battlefield for everyone else, too as Season Two progresses.

Along with its full complement of episodes, Season Two will also include a handful of bonuses. Those bonuses include: Deleted & Extended Scenes, the behind-the-scenes featurette “Inside Turn: Washington’s Spies, and more. The complete list of bonuses included in Season Two is noted below.

Turn: Washington’s Spies – The Complete Second Season will be available in stores on DVD on Tuesday, March 22nd. It will retail for MSRP of $49.98. More information on this and other titles from Anchor Bay Entertainment is available online now at:

Anchor Bay Entertainment announced recently that it will release the first season of its hit AMC series TURN: Washington’s Spies this spring.

TURN: Washington’s Spies—The Complete First Season will be released Tuesday, March 17th. That is just in time for audiences to catch up with the hit historically-based series before its second season debuts this spring. It will be released both on DVD and Blu-ray + Digital HD combo pack. The ten-episode season will be spread across three discs on both sets. It will also include a handful of extras, which are noted below.

Based on author Alexander Rose’s book Washington’s Spies, Turn: Washington’s Spies centers on patriot Abe Woodhull. Woodhull is a farmer living in British-occupied Long Island. He joins with a group of his childhood friends to form what would become known as the Culper Ring in an effort to help then General Washington and his forces defeat the Red Coats in the Revolutionary War. What resulted would go on to be considered the birth of espionage. The series stars Jamie Bell (The Adventures of Tin Tin, Billy Elliot, Flags of Our Fathers), Seth Numrich (Gravity, Private Romeo)m Daniel Henshall (Out of the Blue, These Final Hours, The Babadook), Heather Lind (Boardwalk Empire, Sleepy Hollow, Blue Bloods), Kevin R. McNally (Downton Abbey, Pirates of the Caribbean 1 – 4, Supernatural ), Meegan Warner (Portend, The Veil, A Place To Call Home), Burn Gorman (Torchwood, Pacific Rim, The Dark Knight Rises), Angus McFayden (Californication, Chuck, The Pinkertons), JJ Field (The Musketeers, Captain America: The First Avenger, To The Ends of the Earth), and Samuel Roukin (Harry Potter and the Deathly Hallows: Part I, Bright Star, Happy-Go-Lucky).