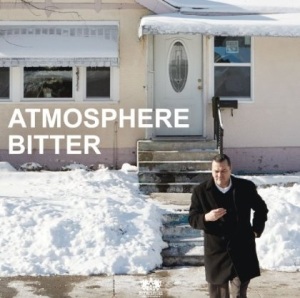 Minneapolis, MN based hip-hop duo Atmosphere will release its latest album Southsiders through Rhymesayers Records Tuesday, May 6th.  In anticipation of the album’s release, the duo (MC Sean “Slug” Daley and producer Anthony “Ant” Davis) has released the album’s debut single ‘Bitter.’  The single is a great first impression for anyone that is new to the duo’s music.

‘Bitter’ is a great first impression for audiences that might be new to the music of Atmosphere first and foremost because it is clean. What’s more, it’s not about drugs and alcohol and doesn’t objectify women.  Yet it still has some serious bite.  That is something that is rare in today’s rap and hip-hop industry.  So any radio programmers that might have this single but have yet to check it out should take this into account and give it a chance.  What’s more, the song could be argued to be a battle rap of sorts.  As the song’s title hints, it is about a friendship that has become broken between two individuals.  What’s most interesting in the song is that Daley’s subject that is speaking isn’t even sure what has caused his former friend to become so hateful toward him.  He writes in the song’s lead verse, “Everything used to be so good then/Now it seems like you’re mad at my footprints/I’m only tryin’ to scribble in the book, man.”  There’s a lot of venom in this line.  But it’s justified venom.  Daley’s bite gets even sharper as that opening verse progresses.

As the opening verse progresses, listeners hear Daley’s attitude blatantly change.  It changes from a point of confusion over the situation to more of a confident, defensive attitude.  He doesn’t allow his subject (himself?) to remain the victim.  His subject becomes more empowered, telling his former friend, “It’s not my fault you’re hurting/You must have a lot of free time/Otherwise, why you tryin’ to see mine/Strain ya neck/Let the blame project/Don’t give yourself the same respect/So independent but undependable/We’re all gettin’ old/So take a mental note/And  stop being so covetous/The crime is the punishment/Now run and get a sliver of dignity/You ain’t gotta be a figure of misery/You don’t want to be a victim to victory/Listenin’ to a bittersweet symphony.  His subject is telling that former friend, “Hey, We’re getting older.  Stop being this way.  You’re only hurting yourself! So grow up and stop being so immature!”  This is one hundred percent relatable for any listener.  Who out there hasn’t been in the situation of having a friend that turned on them and started hating them without any explanation whatsoever?  That ability of the song to relate to its listeners is the starting point of what makes the song an excellent first choice for Atmosphere’s upcoming album.  Just as important to the song is its musical side.

The musical side of ‘Bitter’ makes the song an excellent opener for Southsiders because of how well it complements the song’s biting lyrics.  The keyboard line is the starting point of what makes the song’s musical side work.  The keyboard line is an arpeggio of sorts.  The arpeggio is in a minor key.  That minor key adds a certain emotion to the lyrics in itself.  The equally strong bass line makes for an excellent counterpoint to the keyboard part.  The bass line uses more notes than the keyboard part.  But looking at the song from the vantage point of composition, the solid four-count of the bass line’s whole notes actually accents the eighth notes of the keyboard line.  The specific notes of the bass line counter the keyboard line perfectly, too making the two feel even more like one whole.  Add in a chorus comprised solely of low voices at the song’s end, and the song as a whole ends up sticking in listeners’ ears and minds just as easily as anything that is on mainstream hip-hop radio today.