A cappella outfit Voiceplay has just released a video of the group performing a medley of songs from the movie’s soundtrack via Yahoo! Music.  The group was joined by Broadway star Rachel Potter (The Addams Family, Evita) for the performance. 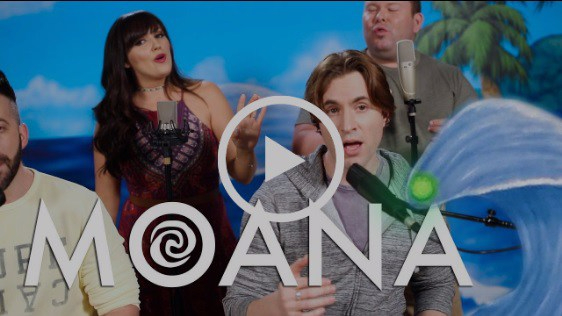 Voiceplay member Eli Jacobson discussed the new medley and its partnership with Potter for the video in a recent interview with Yahoo! Music’s Lyndsey Parker.  He said during the interview that developing its take on the songs and bringing Potter on for the project was natural.

“The music is just truly inspirational and we individually felt connections to the characters,” Jacobson said.  “We also all share the dream of providing music and voicing for an animated film and knew that Rachel would have a great take on Moana.  The fact that our kids and families love the music is just really just a huge plus.”

“I was just so elated to get to do a Moana medley with these guys,” Potter said.  “It really captures the emotions throughout the entire film in just a few minutes and it’s something Jude (Potter’s son) and I can enjoy for years to come.”

Potter’s collaboration with Voiceplay on its new medley is not the first time that she has worked with the group.  She also worked with the quintet on The Phantom of the Opera and Charlie Puth’s Attention.   Voiceplay itself has already crafted a medley of popular Disney showtunes including numbers from The Little Mermaid, The Lion King and Aladdin as part of Disney’s celebration of its 20th anniversary on Broadway.

More information on Voiceplay’s new Moana medley is available online now along with all of the group’s latest news and more at: