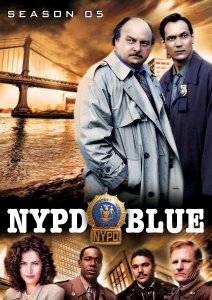 NYPD Blue was one of the biggest and most talked about crime dramas on television over the course of its twelve years on ABC.  The reason for that is that in comparison to the likes of Dick Wolf’s Law & Order franchises and CBS’ CSI series, it was far grittier than any of those programs.  One could easily argue that the success of NYPD Blue is to thank for FX’s The Shield rising to fame.  Of course, that series was itself based on a British series from the 1970s known as The Sweeney.  So it goes without saying that NYPD Blue was a groundbreaking series for its time.  And now thanks to Shout! Factory, the fifth season of the hit crime drama is now available in its entirety on DVD box set.  NYPD Blue Season Five is one of the favorites of fans everywhere.  That’s because it really exhibited the talent of the show’s writers at their peak.  The writing is just the starting point for the success of Season 5.  While it’s somewhat minor, audiences will agree that Season Five maintains the show’s image totally separate from the other crime dramas on television.  That will be explained later.  Just as much worth noting is the show’s music.  The music goes right along with the show’s image.  It wasn’t that perfect spit-shined sound that all of the other crime dramas used (and still use today).  These factors and so many more make NYPD Blue Season Five a fantastic trip down memory lane for any true fan of what was and still is one of ABC’s most revered series.

The fifth season of NYPD Blue stands out as one of the series’ best to date.  It is such an exceptional season first and foremost because of its writers.  The writers proved yet again with Season Five their ability to tell multiple stories without letting them get bogged down in each other.  This is something that still remains problematic for so many crime dramas today.  It was especially the case for the CSI franchise for many years.  The show’s writers relied more on sex appeal to try and cover up the fact that their stories were relatively shallow and had a tendency to get caught in themselves.  Just as much to the credit of NYPD Blue’s writers, their stories had substance.  Sure, there was some sex appeal.  But it largely took a back seat to the storylines that leave audiences on the edge of their seats right up to the end without audiences even realizing it.  A prime example of this was the season opener, “This Bud’s For You.”  This episode finishes off the cliffhanger that was started in Season Four’s finale.  The Joey Salvo homicide is finally figured out. And in the process, audiences see some personal character development among the cast. There’s more than enough drama to go around.  But none of it overpowers any other part of the episode.  That is a true sign of a well-written show.  And audiences will see that, again, throughout Season Five.  It’s just the starting point of this season’s success, too.

The writing behind NYPD Blue in its fifth season is the primary reason for the show’s success thus far into its run.  Another reason for the show’s success five seasons in is the show’s image. When put alongside its competition, NYPD Blue didn’t have the spit shined and streamlined look of perhaps a CSI or even any of the Law & Order series across the NBC family of networks at the time.  Those that are familiar with Dick Wolf’s varied series will agree with that argument.  The series in question attempted for years to have a certain grit and realism about them.  But they could never escape the more standard look established by Wolf’s company. Even today, Law & Order: SVU still suffers from that issue.  For lack of better wording, it’s almost as if Wolf’s series always held back.  NYPD Blue on the other hand took the road less travelled even five seasons in.  It wasn’t afraid to show a meaner, tougher side of police work.  Both then and now, few if any shows try their hand at such realism.  It continues to stand today as a tribute to the show’s ability to stand out in the crowd, even today.  Audiences will agree when they check out Season Five for themselves.

The writing and the look of NYPD Blue in its fifth season are both important elements in the show’s success.  There is still one more aspect of the series that while minor stands out among crime dramas of its time.  And it is related directly to the show’s image. That aspect is the show’s soundtrack.  Again, one has to note NYPD Blue’s competition at the time to understand why it is in fact so important.  The CSI’s, Without A Traces, and so many others had a specific soundtrack to go along with their relatively spit shined looks. NYPD Blue on the other hand, had a more generic soundtrack.  The show’s writers and creative forces used a soundtrack of music that one might hear on an inner city street, instead of paying royalty fees for a set of catchy tunes or just having a general marketable sound.  It helped even five seasons into its run, to prove how pretentious those other crime drams really were.  On the same branch, it showed once more how hard the show’s writers and creative heads tried to make NYPD Blue stand out.  It did just that.  And set alongside the show’s look and feel, and its writing, it is one more piece proving why even years after its initial run, NYPD Blue’s fifth season remains one of the show’s best. It is available now on DVD and can be ordered online direct from the Shout! Factory store at http://www.shoutfactory.com/product/nypd-blue-season-five. More information on this and other releases from Shout! Factory is available online at http://www.shoutfactory.com and http://www.facebook.com/shoutfactoryofficial.  To keep up with the latest sports and entertainment news and reviews, go online to http://www.facebook.com/philspicks and “Like” it.  Fans can always keep up with the latest sports and entertainment reviews and news in the Phil’s Picks blog at https://philspicks.wordpress.com.