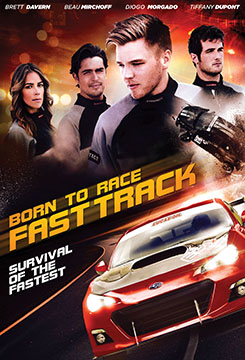 One part The Fast and the Furious, one part Need for Speed and one part Top Gun, the second installment of Anchor Bay Entertainment’s Born to Race franchise is a movie the surprisingly enough holds its own against its bigger-named counterparts.  There’s no getting around the fact that the franchise, which started with Born to Race back in 2011, is not the first of its kind.  Universal beat Anchor Bay to that punch with its massively popular Fast and Furious franchise.  That aside, there is still plenty to enjoy in this latest installment in the Born to Race franchise.  The central point of the movie’s success is its script (I.E. its writing).  Unlike so many other movies backed by major studios out there, the script for this movie rips off neither its predecessor nor its bigger-named brethren.  Another reason that this movie works as well as it does is its pacing.  The movie moves fast.  But it doesn’t move so fast as to leave viewers struggling to keep up with the story.   And last but not least to consider is the movie’s casting.  The movie’s heads wiped the slate clean with this movie, casting a while new list of actors to fill its lead roles.  But those actors still get the job done well enough to keep the movie believable.  These three factors together make Born to Race: Fast Track a movie that despite being an independent release, is a movie that any fan of its genre should see at least once.

The central point of success in Born to Race: Fast Track is its script (I.E. its writing).  There’s no getting around the fact that it is not the first movie of its kind within the race-based action subgenre.  That aside, it actually holds its own surprisingly well against Need for Speed and Universal Studios’ Fast & Furious franchise.  Unlike so many bigger-named movies out there across the genres, Born to Race: Fast Track doesn’t attempt to rip itself off.  Nor does it try to be just another of the aforementioned bigger-named movies in its genre.  The only movie that one could even begin to say it does copy is Tom Cruise’s hit 1986 fighter jet flick Top Gun.  It goes so far as to put lead actor Brett Davern in a pair of aviator sunglasses alongside co-star Beau Mirchoff late in the movie, in a scene that almost directly mirrors one well-known scene from Top Gun.  Even with that blatant lifting, it doesn’t take away from the movie’s overall enjoyment.  As a matter of fact, one could even go so far as to argue that paying such homage to such a classic film without any sense of hamming it up only gives this movie even more credibility.  It would have been so easy for that moment to go overboard.  But it didn’t.  That combined with the fact that the movie’s writers opted to develop a story that didn’t blatantly rip off the Fast & Furious movies makes the movie’s script all the more enjoyable.

The script behind Born to Race’s latest installment is the central point of the movie’s overall enjoyment.  While it obviously does bear quite the semblance to Top Gun in terms of its plot, it doesn’t go so far as to try and be just another Fast & Furious or Need for Speed.  It does at least try to be its own story to a point.  Adding to the movie’s enjoyment is its pacing.  The writing team behind the movie wastes no time setting up the movie’s plot.  And once the plot is established, the writers keep the story moving.  They do so without missing a beat, too.  Most impressive of all is that as fast as the story progresses, it doesn’t move so fast as to leave viewers in its own proverbial dust (bad pun fully intended), wondering what they experienced by the end of the movie’s roughly ninety-minute run time.  It switches gears at all of the right points and never finds itself idling, either.  And yes, both of those bad puns were fully intended, too.  The end result of that smart pacing is a story that movies fast, but not as fast as the cars that take center stage throughout the movie.  Alongside the movie’s solid script, the pacing helps to make Born to Race: Fast Track that much more enjoyable for any fan of all of the racing movies out there.

The pacing of Born to Race: Fast Track’s story and the story itself work together to make the movie one that fans of fast cars will enjoy even with just one watch.  Both elements are important to the movie’s overall success and enjoyment.  There is still one more factor to consider in the movie’s enjoyment.  That factor is the movie’s casting.  The production’s heads wiped the slate clean with this second installment of the franchise.  None of the actors from the franchise’s first movie returned for this installment.  The reason for this happening is anyone’s guess.  It could have been the movie’s heads.  It could have also been that the cast didn’t want to return for a second movie or simply couldn’t due to other commitments.  Regardless, the cast tapped for this movie does its own part to make the movie work.  The new cast members are all quite young.  And most of the cast members are quite well-known in their own right, too.  Lead actor Brett Davern is best known for his time on MTV’s hit series Awkward alongside co-star Beau Mirchoff.  He also has dramatic experience, having acted in bit parts in CSI: Miami, In Plain Sight, and Cold Case.  Mirchoff has also filled roles on CSI: Miami and CBS’ other hit crime drama CSI: Crime Scene Investigation.  Younger viewers might also recognize him from his work on Disney’s Wizards of Waverly Place TV movie The Wizards Return: Alex vs. Alex.  The movie’s other cast members have their own extensive resumes, too.  That collective experience shows through quite well here.  They are actually quite believable in their roles.  That the cast would take its roles with such seriousness even on a flick from an indie studio shows a great deal of respect both for the studio and for audiences.  It also makes suspension of disbelief that much easier for viewers. And in turn, it makes the movie even more worth at least one watch.

The casting of a group of up-and-coming stars for Born to Race: Fast Track and the cast’s seriousness with its roles goes a long way toward making the movie worth at least one watch.  The movie’s script and by connection its pacing add even more value to the overall presentation.  All three factors together make Born to Race: Fast Track a movie that while being an indie release, is one that any fan of movies with fast cars and young stars will enjoy even with just one watch.  It is available now in stores and online.  It can be ordered direct from Anchor Bay Entertainment’s online store at http://www.anchorbayent.com/detail.aspx?ProjectId=d3c94bf6-38e7-e311-877b-d4ae527c3b65.  More information on this and other releases from Anchor Bay Entertainment is available online at