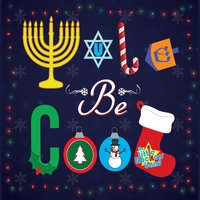 It’s officially that time once again, everyone. Halloween has come and gone once more. The candy is all eaten and the costumes are put away for another year. So are the decorations both in stores and homes across America. In their place are the annual Hanukkah and Christmas decorations and music. The annual barrage of holiday television specials is not far behind, either. Considering the vast amount of holiday musical offerings that fill store shelves around this time of year and the overall lack of originality those looking to celebrate the season are left with quite a conundrum. Which of the noted offerings are really worth the purchase? That is a tough answer. As difficult as that is to answer, there are rare options out there. One of said options is The Little Rockers Band’s new holiday album Yule Be Cool. The kindie rock band’s new collection boasts twelve songs that the whole family will enjoy throughout the holiday season. That is thanks not just to its featured songs (which is just one reason for the record’s enjoyment) but to the band’s stylistic approach to said songs, too. That is yet another reason that Yule Be Cool proves to be a surprisingly enjoyable musical holiday offering. Last of note in regards to the album’s overall presentation is its sequencing. While the album spans thirteen total tracks, only twelve are actually songs. Over the course of those songs, the band keeps listeners fully engaged thanks to the energy exhibited by each song. That maintained engagement is a solid foundation on which the rest of the noted elements rest easily. All three elements together make Yule Be Cool a holiday collection that is indeed a cool yule treat for the whole family.

The Little Rockers Band’s new holiday record Yule Be Cool is a fittingly titled record. That is because despite the band–Jessie Apple (vocals, acoustic guitar), Chris Apple (vocals, bass), Liam Moroney (electric guitar, vocals), and Billy Papenberg (drums)–being known largely for its kindie rock offerings, its new collection of holiday tunes is one that the whole family will enjoy. the songs featured on this record are more than just the standard collection of holiday tunes. Those standards are there. That’s obvious. However, there are also some original compositions included among the album’s eleven musical offerings. More specifically speaking, of the album’s eleven musical offerings (the album’s twelfth track is just dialogue), five are original compositions beginning with the album’s opener ‘This Is How It Feels At Christmas.’ It is a fun, poppy piece that comes from the vantage point of a young child in which the child describes the positive emotions generated by all of the classic Christmas elements. ‘Hanukkah Is Here’ and ‘Snow Falls’ are two more of those five total original compositions. The very fact that the band would pay respect to not just Christmas but Hanukkah as well (this isn’t the only song in which the band pays respect to the Jewish community) sets it quite far from other acts and their holiday offerings. And the gentle, almost Vince Guaraldi-style sound of ‘Snow Falls’ will entertain audiences of all ages just as much. It is just one more example of how the songs that make up the body of Yule Be Cool make it such a surprisingly enjoyable musical holiday treat for the whole family. That is not to ignore any of the compilation’s other offerings. Overall, the fact that the band made an obviously concerted effort to not just churn out a standard, run-of-the-mill holiday record here, even with the included holiday standards, is reason enough for any family to have this record in its holiday music library.

The songs that make up the body of Yule Be Cool are in themselves plenty of reason for any family to have this record in its holiday music library. They are not the ony reason that families will want to add this collection to their holiday music libraries. The band’s stylistic approach to the featured songs is another reason that the record succeeds so surprisingly well. The toned down take on ‘Jingle Bells’ in ‘Jingle Bells Rock.’ In comparison to the standard take on the song, the band has slowed the song’s tempo here yet still made it just light enough in its overall delivery to make it enjoyable in its own right. Very much in the same vein, the more upbeat take of ‘Rudolph The Red Nosed Reindeer’ will impress any fan of The Brian Setzer Orchestra. That is especially thanks to Liam Moroney’s guitar work and Billy Papenberg’s time keeping. Moroney’s surf rock style solos will put a smile on any listener’s face, and will have said listeners dancing along just as much. The only song that can rightfully be argued to be a near direct take is the band’s take of Jose Feliciano’s hit song ‘Feliz Navidad.’ While the song itself stylistically is a near mirror image of Feliciano’s original, the band has actually mixed things up a bit here by adding Hanukkah to the mix instead of just singing Merry Christmas over and over again. It is a reflection of the times and just one more way in which Yule Be Cool proves in fact to be a cool treat for the whole family this holiday season. Together with each of the other noted songs and those not directly noted, it can be said with even more certainty that the stylistic approach taken to each of this record’s featured songs is yet another reason that the collection in whole is, again, a cool, yule treat for the whole family throughout the holiday season. It is still not the last remaining reason that the album proves so entertaining either. The record’s overall sequencing rounds out the reasons that families will want to hear this collection of holiday tunes.

The songs that make up the body of Yule Be Cool and the band’s stylistic approach to each gives listeners of all ages plenty of reason to hear this compilation. Both elements together make it a record not just for children but for the whole family. While both elements prove to be of equal importance in the grand scheme of things here, they are only two-thirds of the album’s overall presentation. The record’s sequencing rounds out the reasons that Yule Be Cool is indeed a cool holiday record. Over the course of the record’s twelve (technically thirteen) tracks and forty-six minutes, The Little Rockers Band manages the record’s energy in such fashion that the record never loses its proverbial “oomph.” Much like a perfect wave for surfers or mountain for skiers, the ups and downs throughout the record are so perfectly balanced that the energy is never too much or too little at any one point from beginning to end. Every song stays just close enough to the next in terms of its energy and overall delivery that the record in whole proves from beginning to end a holiday record that every family will enjoy without having to ever skip one song or another. That being the case, it means that families that add this record to their holiday music collections will hear for themselves just how cool it is. This is especially the case when the songs and the band’s approach to each is taken into consideration. All things considered, Yule Be Cool proves in the end to be a truly cool treat for the whole family this and every holiday season.

Yule Be Cool is one of the most surprisingly enjoyable of this year’s holiday music offerings. That is largely thanks to its mix of musical selections. Instead of just being another collection of standards, the band has taken a handful of standards and mixed it with its own selection of original compositions. The end result is a collection of songs that stands out quite well from all of the other annual musical holiday offerings churned out this and every year. The band’s stylistic approach to each of the record’s featured songs adds even more reason for audiences to check out this compilation of holiday tunes. The band presents its own original take on the standards and just as interesting takes on its own compositions. The sequencing of the featured songs couples with both of the previously noted elements to make Yule Be Cool a record that is in whole a surprisingly cool collection of songs for any family this and every holiday season. It is available now in stores and online. It can be ordered online direct via CD Baby at http://www.cdbaby.com/cd/thelittlerockersband4. More information on Yule Be Cool is available online now along with all of The Little Rockers Band’s latest news at: