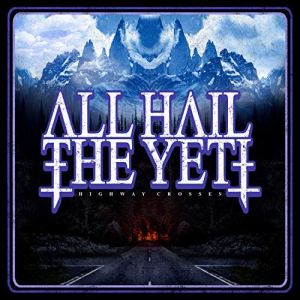 More than two years after the release of its sophomore album Screams From A Black Wilderness, All Hail the Yeti finally returned Friday with its third full-length studio recording, Highway Crosses.  The record’s release is important to note because for some time, there was some speculation among fans as to whether it would ever see the light of day.  That is because the band released a short snippet of the video for the album’s lead single ‘Slow Season’ on Jan. 18.  From the time of its release up until September, little to no hint of anything new was released, but then on Sept. 24, the full video was released along with an announcement that Highway Crosses was officially on its way, and soon at that.  The wait was worth it, too.  That is evidenced in part throughout the course of the 11-song, 40-minute record, not the least through the pounding indictment of today’s social media-based society, ‘Anti-Social Media.’  It will be discussed shortly.  ‘Cleveland Avenue,’ which immediately precedes that song, is another example of what makes Highway Crosses such a strong new effort from All Hail The Yeti.  It will be discussed a little later.  ‘Live Everyday’ is one more example of Highway Crosses’ strength, and will also be discussed later.  Each song is important in its own way to the whole of its new album.  When they are considered along with the songs not directly noted here, the end result is an album that is one more candidate for any critic’s list of this year’s top new hard rock and metal albums.

All Hail The Yeti’s third full-length studio recording Highway Crosses is a strong new offering from the Los Angeles, California-based band that over the course of its 11-song, 40-minute run, continues to cement the band as one of the big names in the metal community’s next generation of bands.  On that same note, it proves from start to end, to be an easy candidate for any critic’s list of the year’s top new hard rock and metal albums.  That is proven late in the album’s run in the socially-minded ‘Anti-Social Media.’  In regards to that theme, it is inferred as front man Connor Garritty screams, “May I have your attention/Right f***ing now/Sit down and save your questions/And shut your mouth/I’m right/You’re wrong/It’s gone on for far too long/Put down/Your phone/I cannot leave this one alone/I cannot leave this one alone/You can’t/Replace all the things that have crossed my mind/Friendships are trending now/I don’t need someone to save me/Just someone to make me proud.”  He goes on to sing in the song’s second verse, “I’m sick of feeds and filters/And pointless rants/Social justice warriors/With no right/On your Facebook irony/Don’t forget to post your hashtag vanity/The end of days has now begun.”  From there, the song enters its bridge, which leads Garritty to proclaim in the song’s final minutes, “You can say you’re right/You can say I’m wrong/We can say what the f*** we like/This is anti-social media.”  It becomes crystal clear through this lyrical content that this song is a statement about what has become of the world as a result of social media.  The song is not a denouncement of social media itself, but rather an indictment of people and how people have allowed themselves to become so negatively changed through social media.  It is a powerful statement that while obviously not the first of its kind from any act, is still important because it is a reminder to people to not let themselves become so wrapped up in social media and its negative influence.  Keeping that in mind, this song proves a powerful example of what makes Highway Crosses a welcome return for All Hail the Yeti.  Of course it is just one part of what makes this song worth noting.  The song’s musical arrangement is just as worth noting as its lyrical content.

Looking at the song’s musical arrangement, the driving, opus is successful in illustrating the thoughts and emotions of the song’s lyrical theme.  Drummer Ryan Kittlitz’s time keeping couples with the song’s guitar line and Garritty’s own powerhouse vocal delivery to make clear the frustration generated through people’s vanity put on display via social media, and the overall divisive nature of platforms, such as Facebook, Instagram and Twitter.  When this is considered along with the lyrical presentation of that frustration, the whole becomes even more clear in its strength in the overall frame of Highway Crosses.  Keeping this in mind, the song is not the only work that shows Highway Crosses’ overall strength.  ‘Seymour Avenue’ is another example of what makes this LP another welcome effort from AHTY.

‘Seymour Avenue’ centers on the discovery, in 2013, of three women in Cleveland who had been abducted by sex offender Ariel Castro.  The women’s story made national headlines, with graphic descriptions of what Castro did to the women while holding them captive in his home, and how their escape from his clutches started with the escape of one of the women.  All Hail The Yeti’s song focusing on their nearly decade-long captivity is something that few, if any, other band has ever crafted, and it goes in line with similarly styled works from the band on its past albums.  Those songs focused on stories such as an orphanage that burned to the ground with dozens of children inside and other tales.  The song’s musical arrangement is an absolutely pummeling work that again, does such an expert job of illustrating the emotions that those women must have felt.  That is evident in the down-tuned guitars and Garritty’s grinding vocal delivery.  The best description that this critic can give of the sound is a hybrid of sludge metal a la Crowbar, doom rock a la Type O Negative and something else difficult to pinpoint.  That aside, the overall arrangement again does an expert job of creating a fully ominous atmosphere for the song and its story, which again clearly was for those women.

Garritty tells the women’s story in no uncertain terms, screaming, “Someone new arrived today/I have yet to see her face/I hear the screams from down below/There’s evil in this place/Chained/To the wall/All alone/She’s shaking/A room/Down the hall/All alone/He’s waiting/Can someone save me/So cold/Memories are covered with stars/Don’t say his name/Just fight through the pain/To be dragged back into the dark/Two more girls/A nightmare show/Now they fear the worst/Their abduction makes the family grow/Vanished from the Earth/Chained/To the wall/All alone/She’s shaking/A room/Down the hall/All alone/He’s waiting.”  Again, this is largely the description that was given by every news outlet of the situation in which the women were held during their captivity.  The mention of the “family growing” references how Castro even impregnated one of the women.  It is a modern-day horror story that thankfully ended with the women escaping and surviving, and while they are still emotionally recovering today, will never have to see that horrible excuse for a human again since he is dead.  The band, here, is merely telling the story, reminding people of the evil of which mankind is capable.  When this is coupled with the song’s imposing musical arrangement, it becomes fully evident that this song is yet another clear example of what makes Highway Crosses another strong effort from AHTY.  Even with this in mind, this song is still not the last of the works that can be cited in showing the album’s overall strength.  ‘Live Everyday’ is one more example of what makes Highway Crosses a welcome new offering from the band.

Just as with ‘Seymour Avenue’ and ‘Anti-Social Media,’ ‘Live Everyday’ stands out in part because of its musical arrangement that crosses sludge, melodic hard rock and metalcore elements for a whole that instantly grabs listeners, and holds them to the end of the three-minute-plus opus.  That arrangement is just one part of what makes the song overall another one of Highway Crosses’ strong points.  Its lyrical content is just as important to its whole as its musical arrangement.

In regards to its lyrical themes, the song actually comes across as being rather uplifting, despite its heavy, grinding musical arrangement.  This is inferred as Garritty screams, “Take a look into our lives/the past is left behind/This is the time/the time to rise/Stand with us/It will be alright/Be grateful for the setting sun/Let you know that this day has come/You fought this fight/Fought it on your own…The world was ours/We had it all/to take the time/To change your mind/Don’t let it go/I can see you there/Before the fall/We came from starts/the world was ours/But now is gone/Everything is in your sights/Nothing in the way/You must believe/Believe in your heart/Don’t let the world tear your soul apart/Live your days like they are your last/And love with everything you have/The end is near/Closer everyday/Live in the moment/Don’t waste it away.”  This is a pretty straight forward message, and one that is certain to uplift any listener.  In hindsight, the fury in the song’s arrangement actually works well here in that it can be argued that that fury helps to illustrate the determination of someone working to overcome the negative emotions that work so hard to overcome.  To that end, the power in the song’s musical arrangement makes even more sense, and when coupled with this positive, uplifting lyrical theme, makes the song in whole doubtless, one more of Highway Crosses’ strongest points, if not its single strongest point.  When it is considered along with the other songs noted here, and those not directly noted, the end result is an album overall that will appeal to All Hail the Yeti’s more seasoned fans as well as those who are less familiar with the band.  What’s more, it cements the band even more as one of the most import names in the next generation of hard rock and metal.

All Hail The Yeti’s new full-length studio recording Highway Crosses is another strong new effort from the band.  That is evidenced through all three of the songs discussed here and the other works not directly noted.  The songs’ musical arrangements will appeal to a wide range of metal fans while the lyrical themes are just as widely appealing because of their variety and general content.  From start to end, that combination of widely appealing musical and lyrical content is certain to reach plenty of listeners.  Keeping all of this in mind, Highway Crosses is, overall, a work that has cemented AHTY’s place in the metal community just as much as its predecessors.  It has also cemented the band’s place on any critic’s list of the year’s top new hard rock and metal albums.  It is available now.  More information on Highway Crosses is available online now along with all of All Hail The Yeti’s latest news and more at: