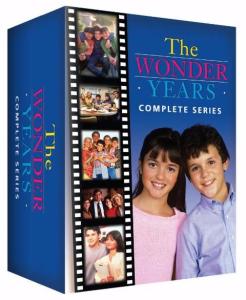 There is good news for fans of ABC’s classic family drama The Wonder Years.

Time Life Entertainment has announced that it will re-issue the series in a complete series box set next month.  It is currently slated to be released Tuesday, August 23rd and will retail for MSRP of $119.95.  The new re-issue will feature all 115 episodes of the six-season series spread across 22 discs and 12 hours of new bonus material.  Those bonus features include: highlights from the cast’s first reunion in 16 years, a farewell set tour, Exclusive interviews and more.  It also features all of the songs originally used in the series’ 5 year, six season run including: Jimi Hendrix, Bob Dylan, Joni Mitchell, The Byrds, Simon & Garfunkel, Aretha Franklin, James Taylor, Joe Cocker, and many others.  The series’ soundtrack in total comes to 300 songs.

Over the course of its six seasons on the air, The Wonder Years was one of television’s most popular series.  It earned a spot on Neilsen’s Top 30 in four of those seasons.  It earned an Emmy® for “Best Comedy Series,” and at age 13 lead actor Fred Savage became the youngest actor ever nominated for “Outstanding Lead Actor For A Comedy Series.”  The series would eventually go on to earn a total of 24 awards and be nominate for 70 more.  Those nominations and wins included: Emmy® Awards, A Golden Globe®, and in 1989 a Peabody® Award for pushing the boundaries of the sitcom format and using what were then new methods of storytelling.  Even after the show ended its run, its impact was still being felt.  In 1997 “My Father’s Office” was ranked #29 on TV Guide’s 100 Greatest Episodes of All Time.  The series’ pilot episode was ranked #43 on that same list.