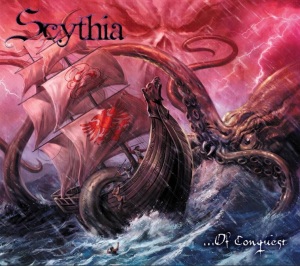 Odds are that many American metal audiences have never heard of Scythia.  That all changes here and now.  Anyone that is a fan of Trans-Siberian Orchestra, Judas Priest, In Flames, and even Dream Theater will enjoy the latest release from the Canadian power/prog rock band.  Of Conquest, the band’s fourth full length studio release, offers audiences even more adventure from the four-piece.  Stylistically speaking, this new record presents a sound that fans have come to know from the band’s previous records.  In terms of its content, the band has offered its fans something new once again.  Instead of delving into the world of warriors, wizards, the band has opted this time for a high seas hard rock epic.  Those that might be new to the music of Scythia will enjoy this record first and foremost of its musical content.  While this record boasts a sound similar to Scythia’s previous records, the sound stands out because of its hybrid qualities.  This will be discussed later.  The story presented in Of Conquest is just as certain to entertain any pure blooded metal head that is open-minded enough to give the record a chance.  In giving it a chance, said audiences may very well themselves find this new record to be one of their own favorite rock albums.

The musical side of Scythia’s new record is relatively similar to that of the band’s previous records.  On the surface, it comes across as another power/prog rock record, stylistically speaking.  But a deeper listen reveals something even more intriguing. The band’s sound is actually a subtle hybrid sound.  While the power/prog element comes out above others, there are also some obviously Swedish metal influences, too.  That’s obvious in the performance of lead guitarist/vocalist Dave Khan and even drummer/backing vocalist Celine Derval.  As a matter of fact, if one were to listen to this record without knowing that Derval was a member of the band, one would swear that the screaming female vocals that are interwoven into certain songs were that of Arch Enemy vocalist Angela Gossow.  Speaking of Arch Enemy, Dave Khan’s prowess on the guitar is just as impressive as that of Michael Amott and other fellow Swedish shredders.  It just goes to show the influence of Swedish metal on the rock world.  Some might consider it musical heresy, but Khan’s own vocals are even on par with the likes of Rob Halford, Bruce Dickinson and others.  Considering that this band released its debut album only four years ago, that is saying something.  Audiences that give this new record a chance will be surprised to find themselves agreeing with this comparison, too.  The positives of Of Conquest  don’t end here, either.  Just as noteworthy with this latest release is the album’s lyrical side.

Scythia has given its audiences a new story with each one of its previous releases.  Those releases have been steeped in fantasy and legend somewhere along the lines of perhaps Amon Amarth and others, only toned down.  There is still plenty of myth on Of Conquest.  But this time, the myth is used in a high seas hard rock opera of sorts.  This album presents a young protagonist that decides to take to the high seas in the late 1500s.  At first things seem great.  But it doesn’t take long before the young unnamed subject finds himself on quite the adventure.  From getting caught in an unforgiving storm to battling a kraken to facing some unspeakable figures late in his journey, he has great odds to face.  Making the story all the more interesting to take in is the fact that despite the band’s hybrid hard rock/metal sound, Khan actually sings his way through each “chapter” of the story.  So it’s actually possible to understand what is going on without a dire need for a lyric booklet.  Don’t misunderstand that statement.  Lyric booklets are always a nice addition for any artist’s album, regardless of genre.  It’s just that easy to understand the story.  And that is the final piece of what makes this album a surprisingly enjoyable record.  The band currently has no live events planned.  But fans that want to hear the band live or those that want to check out the new album when it is released can keep up with the band online at http://www.scythia.ca and http://www.facebook.com/scythiametal.  To keep up with the latest sports and entertainment reviews and news, go online to http://www.facebook.com/philspicks and “Like” it.  Fans can always keep up with the latest sports and entertainment reviews and news in the Phil’s Picks blog at https://philspicks.wordpress.com.