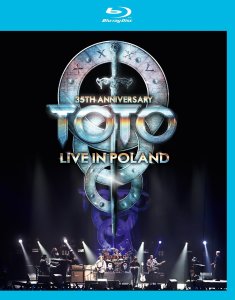 Veteran rock band Toto released its self-titled debut album on October 15, 1978. That was almost thirty-six years ago. The band has released twelve full length studio albums since then with a thirteenth due out in 2015. While fans wait for that new album, Eagle Rock Entertainment has a new live offering from the band to tide them over. The live offering in question is Toto: 35th Anniversary—Live in Poland. The band recorded the show on June 25th, 2013 as part of its 2013 World Tour. It was released to the world on April 29th, 2014 through a variety of formats. One of the best formats for fans is the concert’s Blu-ray presentation. Toto’s fans will appreciate this recording for a number of reasons, the first of which being the show’s set list. The concert itself runs over two hours. Another reason that fans will appreciate the show is the band’s performance. And the production values of the concert are above par. This includes not just the cinematography and the audio mix, but the effects that were used throughout the concert. All of these factors together make Toto: 35th Anniversary—Live in Poland a concert recording that any fan of this veteran rock band will enjoy time and again.

The set list chosen for any band’s live show is one of the main reasons that any fan attends a show or even buys the band’s recording. Fans of Toto will definitely appreciate the set list chosen for this concert. The songs chosen for this concert cover a relatively large part of Toto’s catalogue. Not every album is represented here. But in order to do that, the band would have had to lengthen its concert thus making for a second disc. True Toto fans would like that. But for what it is, the set list presented here will impress fans regardless. It goes all the way back to the band’s self-titled 1978 debut and all the way up to its most recent release, Falling In Between (2006). That extensive set list runs roughly two hours. The bonus behind the scenes featurette adds even more enjoyment for the band’s fans. It brings the presentation’s total time to nearly three hours of content. That is a lot for fans to applaud. Just as worthy of applause is the band’s overall performance. That’s the next factor to consider in this recording.

Guitarist Steve Lukather told the audience in attendance for the taping of this concert that Toto’s members had been making music together for thirty-five years, and that many of its members had known each other for forty years. One might ask what this has to do with anything. The answer is simple. As viewers will see in watching this recording, Toto obviously hasn’t lost any steam over the course of thirty-five years. Even those that might not be so familiar with Toto will be surprised at the band’s stage presence and the energy that it exudes in its more up-tempo songs. On the other hand, audiences will be just as impressed by the band’s control and gentility in its more reserved moments, too. There are other far more well-known bands than Toto out there that are pale shadows of themselves thirty plus years after they first broke out. The members of Toto—Steve Lukather (Lead vocals/guitars), David Raich (Lead Vocals/Keyboards), Joseph Williams (Lead Vocals), Steve Porcaro (keyboards), Simon Phillips (drums), Nathan East (bass/backing vocals), Amy Keys and Mabvuto Carpenter (backing vocals)—show here that their proverbial tanks are as full in this performance as they were in the band’s younger days. And the energy exuded by the packed house before which the band performed mirrored that energy, too making the performance all the more worth watching.

The band’s performance and its set list are of equal importance to Toto’s latest live recording. While both factors are equally important, there is one more factor to examine in this recording. That factor is the show’s production values. The production values in question include the cinematography, the audio mix and the special effects used throughout the show. The auditorium in which the band’s show was recorded was rather large. That’s obvious thanks to the expert work of the camera crew that recorded the show. Adrian Van Nelson did quite the job of getting the audio levels equalized. Not one member of the band steps on the other at any one point in the performance in terms of sound levels. And even the camera crew, helmed by Blue Leach fully captures the emotion and energy of each song with ease. The more up-tempo songs are leveled with equally fast paced shots of the band and the audience. The slower, more reserved moments are given even more depth and emotion as the camera crew gently and slowly transitions from shot to shot. The wheeled camera that sits right at the front of the stage slowly pans across the band as it slides along its rails, making for so much emotion in the show’s slower songs. And the accompanying occasional black and white effect that is also incorporated into said moments adds yet another layer to said songs. And then there is the split screen effect used at various points in the show that showcase every member of the band. Within the context of those shots, viewers actually get more up close and personal with the band than in most live recordings. Viewers actually get to see drummer Simon Phillips play from waist level in one shot. They will actually see his hands moving swiftly across his set. Whether or not one is a drummer, every viewer will be equally amazed at the level of his talent. And in other moments, audiences get to see keyboardists Steve Porcaro and David Raich just as close-up. These are just a few examples of why the audio mix and production values in whole make Toto: 35th Anniversary—Live in Poland all the more worth checking out by audiences whether they be new to the band’s body of work or are more familiar with said collection of music. Those production values together with the band’s performance and its set list all come together to make this recording one more extremely impressive release from Eagle Rock Entertainment.