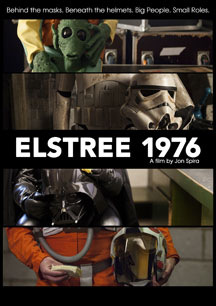 Forty years ago a little-known director named George Lucas started work on a movie by the name of Star Wars.  A year after he started work on the movie it made its U.S. debut and has since gone on to be one of the biggest sci-fi movies of all time.  It has also gone on to be one of the biggest movies in Hollywood’s modern history, making superstars of its lead cast, Mark Hamill, Harrison Ford, and Carrie Fisher.  The immediate supporting cast of Sir Alec Guiness, Peter Mahew, Anthony Daniels, Kenny Baker, and David Prowse gained their own notoriety as a result of the movie.  Though, Mahew and company sadly never really became as famous as Hamill, Ford, Fisher, Guiness, or Mahew.  The same obviously applies to the hundreds of extras brought on board to help flesh out the movie’s universe.  Now thanks to MVD Visual, Prowse and a handful of those others finally get to tell their stories in a new documentary titled Elstree 1976.  This documentary feature is a powerful presentation that every Star Wars fan should see.  That is due in part to its overall story.  That will be discussed shortly.  The work of those behind the program is just as important to note as the stories that make up the documentary’s presentation.  Last of note is the documentary’s bonus material.  Each element plays its own part in the documentary’s presentation.  All things considered, they make Elstree 1976 a Star Wars documentary unlike any other to date.  They make it one that every Star Wars fan should see.

Elstree 1976 is a Star Wars documentary unlike any other released to date.  It is a presentation that every Star Wars fan should see.  That is due in part to its overall story.  The story in question is one of the now legendary movie’s lesser-known cast members.  It is a story of actors who regardless of their roles, have never really gotten the credit that they deserve.  It is powerful in its own right.  That is because of the stark contrast of their lives to that of the movie’s famed lead cast.  It will move viewers to laughter at some points, and emotional pain at others, believe it or not.  The emotional pain is the result of the revelation of the stark contrast in the lives of the featured cast members to that of Hamill, Ford, and Fisher.  One of the program’s most intriguing revelations is that of the hierarchy even among its supporting cast and extras.  As audiences learn through the various stories, there is actually a divide among the movie’s supporting cast and extras involving who deserves to be at the Star Wars conventions and who doesn’t.  It all depends on the place of said cast members in that hierarchy.  The frustration felt between those cast members as a result of the noted hierarchy is interesting to say the very least.  One would never have suspected its existence.  But it is there.  In an even bigger picture, the contrast of the lives of those behind some of the movie’s most iconic characters to those of Hamill, Ford, and Fisher is just as eye-opening.  David Prowse is a prime example of the shocking nature of that contrast.  Prowse was the man behind Darth Vader, not James Earl Jones.  All that Jones did was read the lines originally assigned to Prowse in the movie’s production.  According to Prowse’s own words, he didn’t even know until after the fact that his lines–that he had recited–were replaced by Jones in post production.  He goes so far as to note that he thought his voice would still be the one behind the mask and was surprised by what had been done.  And now decades later, Prowse is not even invited to a number of annual Star Wars conventions.  He even notes that he doesn’t know why.  So he has had to live life largely anonymously.  His isn’t the only intriguing story.  Paul Blake’s story is another interesting part of the documentary’s overall story.  He is the man behind Greedo, the green alien shot by Han Solo in the cantina.  Yet even as iconic as the scene has become, Blake’s name is hardly known in connection to Greedo.  It is only thanks to the conventions that he has managed to build his fan base.  Again, his story is a prime example of the contrast of the cast’s notoriety and lives.  There are plenty of other stories shared throughout the program that serve to illustrate the stark contrast in the lives and fame of the movie’s cast.  Altogether those stories make the documentary’s overall story one that will both surprise and move Star Wars fans of any age.  It is a story that will put the movie into a whole new light for those fans and hopefully give fans a whole new respect for the movie’s lesser-known cast members.  It is just one of the documentary’s most important elements.  The work of those charged with bringing Elstree 1976 to life is just as important to note in its presentation as those interviewed to make up its story.

The stories that make up the overall body of Elstree 19976 are in their own right hugely important to the documentary’s presentation.  That is because of the new light that they shed on the movie’s legacy.  It also sheds a whole new light on the movie’s cast.  That new light is certain to create a whole new respect among audiences for the movie’s lesser-known cast.  It is just one part of what makes Elstree 1976 such an interesting program for Star Wars fans.  The work that went into bringing the documentary to life is just as important to note as the program’s stories.  That is because it is their work that audiences are really experiencing, not just the cast’s stories.  The program starts a little bit slow, at first providing some background bio information on each of the featured actors.  It seems unnecessary at first.  But as the program progresses, audiences begin to see in hindsight the importance of all of the background information that is provided.  Viewers are eventually taken behind the scenes of the movie’s production before eventually into the lives of those actors post Star Wars.  The program’s editing plays its own role in the story, too.  As each actor introduces his or her character, the editors present key footage from the movie that aligns with the actors’ main appearances.  It serves to help viewers make a connection, especially if viewers are visual learners.  Even the footage of the conventions is well placed within the related discussions by the actors in question.  The whole thing comes full circle in the end with the return of the actors’ action figures with the actors discussing the legacy that they helped to create right along with that footage.  It is a great way to complete the program and remind viewers that while these actors may not have the notoriety of Star Wars lead cast, they are still just as important to the movie as Hamill, Ford, and Fisher.  There are plenty of other pieces that could be cited in explaining the importance of the documentary’s actual production.  These are just some of the examples that can be cited in explaining its production.  All in all, every element of the program’s production shows why it (the production) is as important to its presentation as its stories.  Even as important as both elements are to this documentary’s presentation they are not its only important elements.  The documentary also comes with bonus material in its special Blu-ray director’s cut.  It rounds out the documentary’s presentation.

Both the stories that make up the body of Elstree 1976 and its production are important in their own right to the documentary’s presentation.  The stories give a whole new angle to the bigger story of the movie’s creation and a new respect for the movie’s lesser-known cast.  The production ensures just as much viewers’ engagement.  As important as both elements prove to be in the bigger picture of the program they are not its only important elements.  The program’s special Director’s Cut edition is available only on Blu-ray.  It comes with a number of bonus features that are not available in the program’s DVD presentation.  Why this is the case is anyone’s guess.  It honestly would have been nice to see all of the bonuses included in the Blu-ray presentation also included in its DVD presentation.  But that’s a moot point by now.  The bonus material in question includes feature-length commentary from filmmaker John Spira, extended interviews with the cast members, and best of all a tour of Elstree Studios (thus the program’s title) where Star Wars was filmed.  Each extra is fully deserving of being called a bonus in its own right.  Altogether they give an even deeper look at the Star Wars legacy.  They couple with the program’s stories and overall production to make the program in whole one that, again, every Star Wars fan should see at least once.  It may not take fans to a galaxy far, far away.  But it will definitely broaden the horizons of the Star Wars galaxy.

Elstree 1976 is hardly the first Star Wars documentary to ever be released.  It is however a documentary unlike any ever released about the legendary sci-fi flick.  That is because as its stories make clear, it is focused not on the movie’s celebrity cast but those that brought some of the movie’s most beloved characters to life, yet were hardly as acclaimed as Hamill, Ford, or Fisher.  The stories presented in this documentary will leave fans seeing the movie and its cast in a whole new light.  They will keep viewers engaged, entertained, and enlightened.  The program’s production ensures viewers’ engagement just as much as its stories.  This includes its pacing, editing and even writing.  The bonus material included in the program’s limited edition Director’s Cut Blu-ray presentation brings everything full circle.  It would have been nice to have that material included in the program’s DVD presentation, too.  But that just wasn’t to be.  So that aside, the bonus commentary, Elstree Studios tour, and extended interviews prove to be just as engaging for fans as the program’s main material.  It comes together to bring the program in whole and complete its presentation.  Each element is important in its own right.  There is no denying this.  Collectively though, they make Elstree 1976 a presentation that will definitely broaden the horizons of the Star Wars galaxy.  It will be available Tuesday, June 28th and can be ordered online direct via MVD Visual’s online store.  More information on this and other titles from MVD Visual is available online now at: