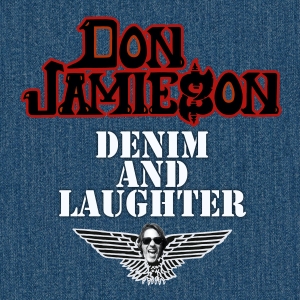 Comedian and television personality Don Jamieson will release his fourth comedy album next week.  Jamieson, known for his time as co-host of VH1 Classic’s hit series That Metal Show and as host of SportsNet NY’s game show Beer Money, will release his new comedy album Denim and Laughter Feb. 21.  The album’s title and cover art is a direct tribute to Saxon’s 1981 album Denim and Leather.  The performance, captured Oct. 19, 2019 at an undisclosed location, is another example of why he is one of this generation’s top comic talents.  That is due in part to the content that makes up the body of his set.  This will be discussed shortly.  The pacing of the set is also important to note in examining the recording’s overall presentation.  It will be discussed a little later.  Jamieson’s stage presence rounds out the most important of the performance’s factors.  It will also be addressed later.  Each item noted here is key in its own way to the whole of Denim and Laughter.  All things considered, they make this latest stand-up offering from Jamieson another work that will bring any listener to tears of joy well beyond its first listen.

Don Jamieson is one of the elite comedians of this era. The three stand-up albums that he has already released – Live & Hilarious, Hell Bent For Laughter and Communication Breakdown – more than do their share to prove that statement.  His latest album Denim and Laughter cements that reputation even more.  That is proven in part through the material that makes up the body of the presented set.  Jamieson takes on a variety of topics,  including political correctness, bands who claim they are reuniting “for the fans,” and even VH1 Classic’s placement on most cable providers’ lineup and how that played into the show’s eventual demise.  As if that isn’t enough, he also takes on a familiar topic in the division between craft beer and original beer.  This bit immediately lends itself to comparisons to Denis Leary’s bit about beer.  It would be interesting to know if that bit played any part in Jamieson’s own bit about the topic.  Along with those topics, Jamieson also takes opportunities to poke fun at Sebastian Bach and  very famous song from 80s rock band Warrant among so much more.  Put simply, Jamie’s set runs the gamut from start to finish, even taking on media bias and politics, hinting that he might be a Trump supporter.  Hopefully he isn’t, but that aside, the hint alone that he might be is enough to warrant a notice for audiences.  Even with that in mind, Jamieson, again, presents a wide range of content throughout his set, most of which will still generate plenty of laughs from audiences.  To that end, the content alone makes this performance well worth experiencing.  It is just one of the aspects of the performance that makes it worth taking in.  The set’s pacing adds its own engagement and entertainment to the performance.

Jamieson’s set in this recording runs a total of 44 minutes.  Throughout the course of that run time, He never once goes too fast or too slow.  Rather, he finds just the right moments throughout the give audiences moments to take in the various punch lines and to prepare for the next bit.  That ability of the audience to prepare for the next bit is controlled by Jamieson himself as he works through each transition on his own time.  Case in point is his transition from his bit about tea tree shampoo to his jokes about the National Football League  and how it has changed over the years for the worse.  The two topics are completely unrelated, so Jamieson gives just enough time between the topics to make sure audiences make the transition with him.  As he makes his way through his ruminations about the NFL’s negative changes, the transitions from topic to topic are themselves just as smooth.  Another good example of the success of the pacing in Jamieson’s set comes as he transitioned from an anecdote about touring with Zakk Wylde to jokes about Black Sabbath, Gwar and how a Gwar concert tied into an alleged experience on a flight.  Jamieson’s timing and pacing throughout the roughly seven-minute-plus span is seamless, ensuring audiences’ engagement and entertainment in its own right.  In yet another example, Jamieson transitions just as easily from his joke about the impact of a celebrity roast involving Sebastian Bach to an equally funny bit about a well-known song from Warrant.  That bit, by the way, really leaves one wondering and laughing in hindsight.  It really is timely in a weird way.  Getting back on track, the examples presented here, when considered along with the rest of the show, make clear why the pacing of the set is just as important to its presentation as the set’s material.  It is not the last of the recording’s most notable items, either.  Jamieson’s stage presence throughout the performance rounds out its most important elements.

From start to finish, Jamieson’s presence in his performance is just as solid as his pacing.  He presents a certain confident swagger, even connecting with certain audience members directly.  On the surface, that doesn’t seem overly important.  However, on a deeper level, this is important to note because it says to the rest of the audience that Jamieson wants to make sure his audiences knows that he cares what the audience thinks.  He does so by acknowledging those specific audience members.  That interaction, in its own way, translates to the rest of the audience, letting them know that he is not just up on stage, but on stage and really interacting on a personal level, as if the audience members were his best friends.  That personalization of the set, of sorts, reflects back on Jamieson, encouraging his confidence that much more.  The end result is a presence that, again, throughout the set never falters.  That confidence plays back into his pacing, and in turn, makes the performance that much more entertaining.  When this is considered alongside the overall content, the whole of the noted elements makes Denim & Laughter a presentation that ensures laughter from audiences.

Don Jamieson’s new comedy recording Denim & Laughter is an enjoyable new offering from the veteran entertainer and television personality.  That is proven in part through the material that makes up the body of Jamieson’s set.  It ranges from the timeless to the random and riotous to even some more dated material.  That whole provides plenty for audiences to enjoy.  Jamieson’s pacing throughout the course of the nearly 50-minute set does its own share to ensure audiences’ engagement and entertainment.  The same can be said of Jamieson’s stage presence throughout his performance.  Each item noted is important in its own way to the whole of this recording.  All things considered, they make Denim & Laughter another positive performance from one of this generation’s top comic talents.  It will be available Feb. 21 through Metal Blade Records.  More information on the recording is available online along with all of Jamieson’s latest news at: